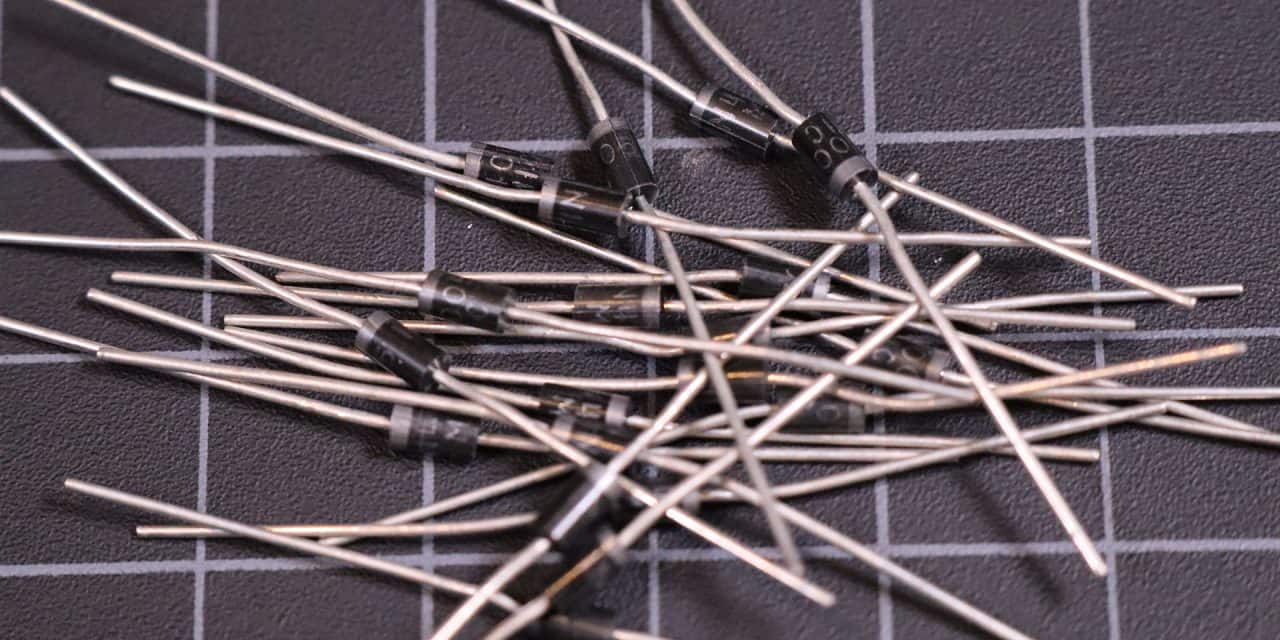 In this tutorial we’re going to answer the fundamental question that you’ve all been asking recently, “What is a diode?”  A diode is a fundamental component that is at the very basics of many electronics projects.  Unlike some of the passive components we’ve talked about recently (like resistors), a diode is a semiconductor. And as far as semiconductors go, one of the most widely used on the planet!

The main function of a diode is to control the direction that current can flow in a circuit. It’s sort of like a backflow preventor (or one-way valve) used in plumbing which only lets water flow in a single direction. In electronics we refer to this direction as the forward direction.  Current that attempts to flow in the reverse direction is blocked.

It is important to understand that there is no such thing (at least yet) as a perfect diode.  A theoretical perfect diode is referred to as an ideal diode. In an ideal diode current flowing in the verse direction would react the same as an open circuit (open switch) and no current would pass.  A multimeter would read the voltage as zero volts. In this scenario we refer to a diode’s state as reverse biased. 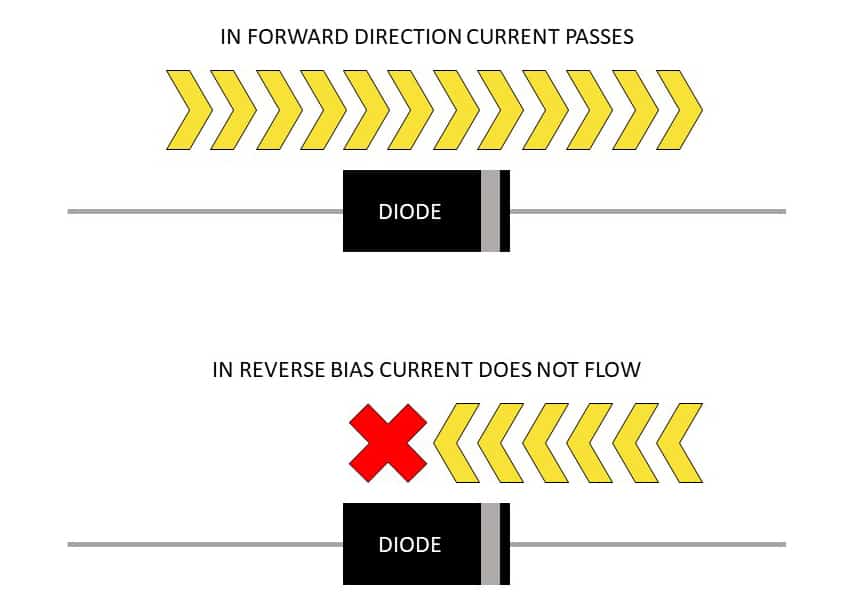 In the real world, there is some current leakage in the reverse direction and different types of diodes will have different characteristics. We’ll get into that in just a bit.

A diode is a semiconductor that has only two terminals.  Terminals are the leads on each end of the diode that get soldered to your circuit board (or inserted into a breadboard when prototyping). Unlike resistors, diodes are polarized. It matters which direction they are placed in the circuit. The positive lead of the diode is called the anode, while the negative lead is called the cathode.

Like all other electronic components, diodes have a symbol to represent them on schematics. It looks like a triangle pointing at a solid line. Some special types of diodes will augment this symbol to make them stand out, and we’ll show them later in the tutorial. 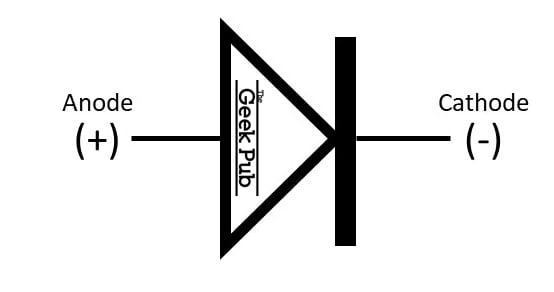 When reading a schematic, current flows in the direction that the triangle is pointing, but it is blocked in the opposite direction.

Let’s continue the fun of answering the question “What is a diode?” by learning some fundamental characteristics of real world diodes. This is what sets them apart from our theoretical ideal diodes.

There are two things that set apart real diodes from our theoretical ideal diodes that are critical to understand.

There are many types of diodes that all have different characteristics.  Some examples are Schottky, Zener, Tunnel, and Varactor diodes. We will cover a few of those in a bit to help you understand.

This is critical when designing a circuit as the diode might not behave as you expect. Real world diodes operate in three separate regions:

Here’s a handy graph to help you understand this relationship: 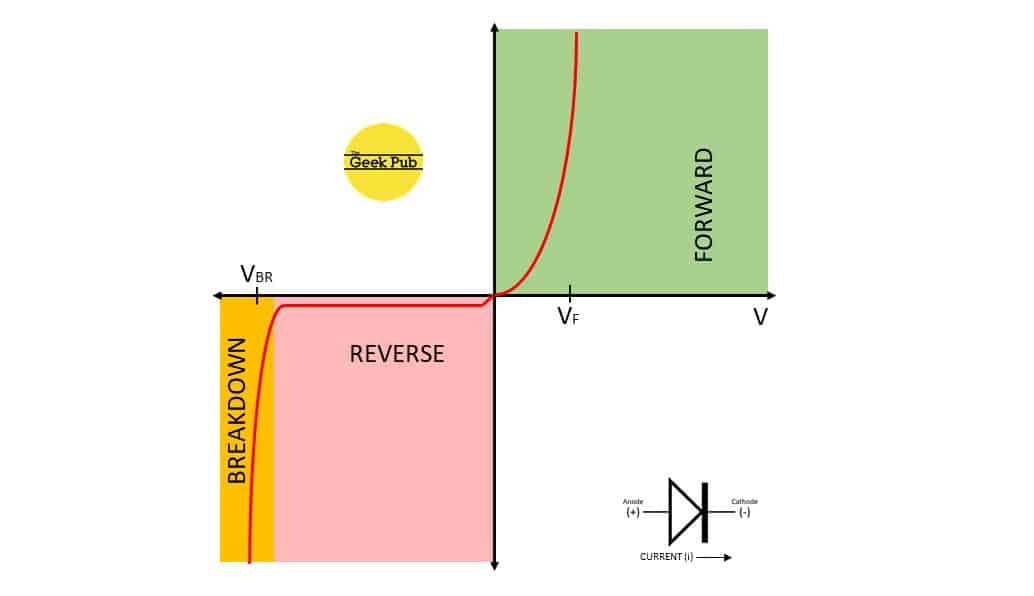 Remember earlier when we said that diodes are not 100% efficient and use some energy in the process of doing their job? A diode requires some amount of forward voltage in order to “turn on”. The voltage required to turn the diode on is called the forward voltage (Vf). Some people will refer to this as the on-voltage or cut-in voltage.

As voltage is increased and reaches the Vf specification, current will begin to flow through the diode. Depending on the material that the diode is made from, it may have a smaller or larger forward voltage (as well as other specifications).  These specs should be taken into consideration when designing your circuits.

Diodes are not perfect as we mentioned before, and if apply a large enough negative voltage to the diode, it will eventually allow current to flow in the reverse direction. Something you likely do not want to happen! This large negative voltage is called the breakdown voltage. Depending on the specifications of your diode, operating in the breakdown region for any length of time will likely cause your diode to fail.

It should be noted that there are some diodes specifically designed to operate in the breakdown region without harm to them, though these are purpose built for specialized applications.

Most standard diodes have a breakdown voltage in the -50 to -100 volt range. Some are of course rated higher or lower for certain applications.

OK! Let’s finish off answering our ultimate question of “What is a diode?” by covering just a few of the most popular and common diodes you will find and use in your electronics projects! 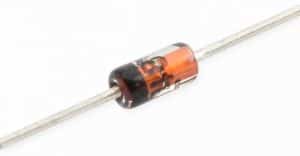 Let’s start off with signal diodes, the standard or normal diodes if you will. These are by far the most common diodes you will find in project you’re building or in devices you are repairing. Standard signal diodes generally have a medium to high forward voltage, and will have a fairly low current capacity.

Signal diodes will have a typical forward voltage of around ~0.72V and a max current rating of around ~300mA. Signal diodes are generally considered to be the most commonly used diodes. 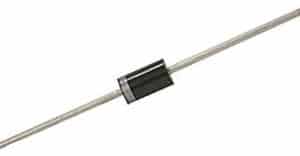 Next up is the power diode. These are much like signal diodes, except they have a larger current carrying capacity. They are often used in a rectifier circuit and therefore sometimes called rectifier diodes.

Generally they have a higher forward voltage requirement, but can carry higher current loads as a trade-off. 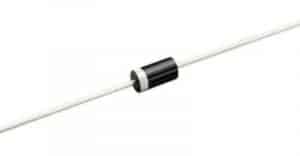 Let’s look a the Schottky diode. These guys are very common and similar to power diodes.  However, they come with some slight differences that make them super useful.  They offer a much lower forward voltage drop in the 0.15V and 0.45V range. This is due to the different material they are made from.  They’ll offer similar breakdown specifications.

While they are slightly more expensive, the Schottky diode is the perfect diode when you need to make a very efficient low power circuit, such as a device running on battery power. 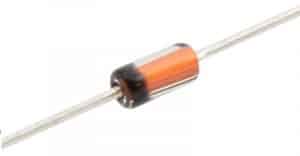 Zener diodes are designed to have a price breakdown voltage. People often refer to this as the zener voltage. The way this works is when the current is high enough in the reverse direction the voltage drop across the diode will hold very evenly at the breakdown voltage.

By limiting the flow of current with a resistor, it activates a stable voltage. This type of diode is often used to create a reference voltage in regulated power supplies.

We hope this tutorial helped you understand diodes a little better and that you create some awesome projects! You might also be interested in our tutorials on How to Use a Multimeter, and our Oscilloscope 101 tutorial.

We’d also recommend adding a diode kit to your electronics arsenal. This affordable diode kit from Amazon is the one we bought. 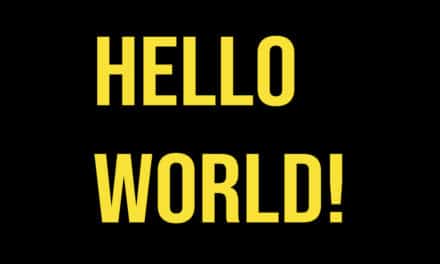 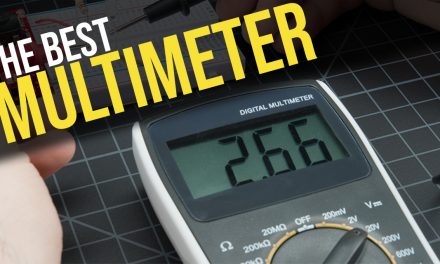 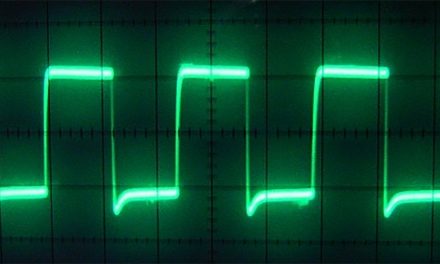 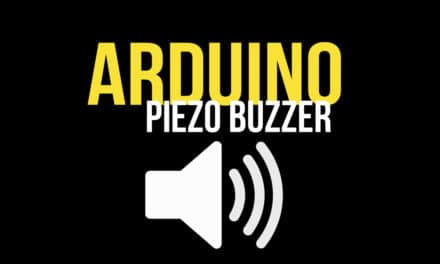