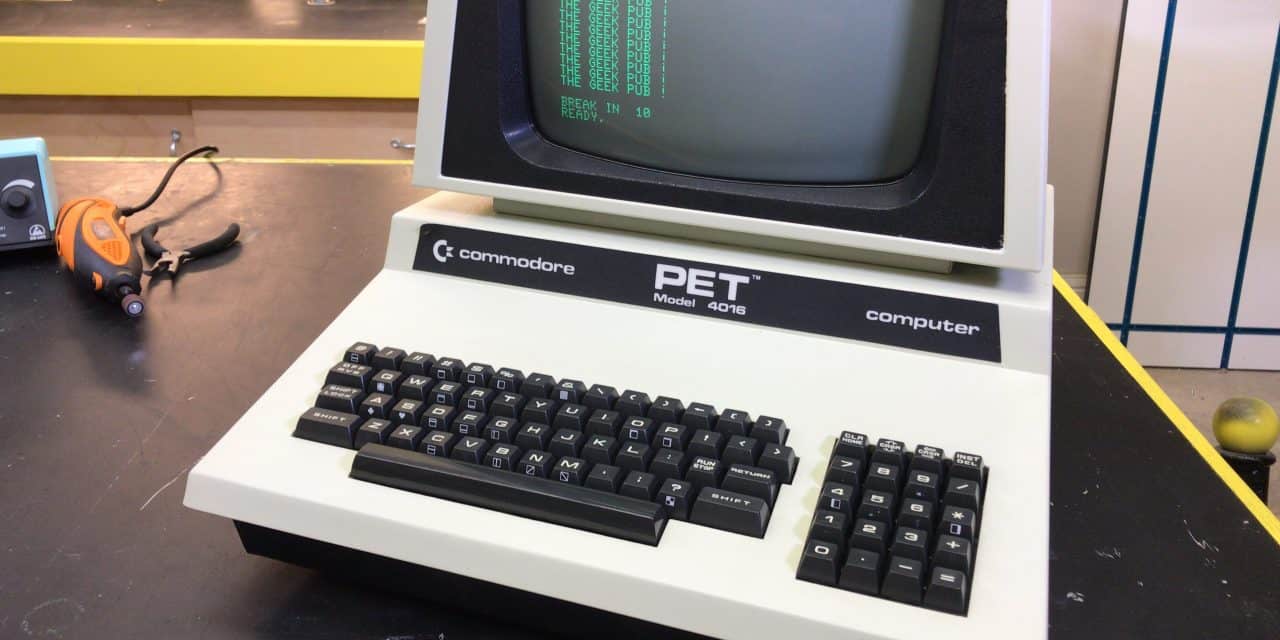 A few episodes back on The 8-Bit guy, David restored a vintage Commodore PET Model 4016. However, he left one thing incomplete. The space bar didn’t work.  Since it wound up in my museum, repairing the Commodore PET has been high on my list of things to do.  It’s incredibly hard to use the thing with a broken keyboard.

The Commodore PET is one of those computers that it near and dear to my heart.  Commodore was originally a calculator company. In the late 1970s after TI introduced their new line of calculators and basically dominated the market over night. Commodore CEO Jack Tramiel had recently acquired MOS Technologies, a chip fabricator and their CEO Chuck Peddle became the Chief Engineer at Commodore.  These two decided it was time for Commodore to enter the computer market and the Commodore PET was born!  It was originally based on cash register style components, but quickly morphed into the Commodore 4000 series.

Commodore invested heavily in the education market, giving big discounts to schools.  This is the reason that the Commodore PET is so near to my heart. It’s literally the first computer I had ever used. My elementary school had a few PETs and it is where I learned the BASIC programming language.

The space bar on this Commodore PET is a dud. Someone was quite literally a destructive bull and broke the tabs from the torsion wire.

I immediately realized that the plunger for the PET’s space bar was installed backwards.  I am not sure whether David did this during his repair, or it was done by the previous owner and David just missed it. Either way, it had to be corrected and unfortunately that meant a complete disassembly of the keyboard. A lot of work and a slow go.

The PET is literally built like a tank.  As if they meant for this thing to go to war. They keyboard itself is held on by twelve relatively large machine screws. In comparison, most keyboards today are simply glued together.  Additionally, the circuit board on the back of the kThe good news is that the fix is rather easy once you get the keyboard disassembled.  Simply life the plunger out of the cavity, rotate it 180 degrees and drop it back in.  Of course, you’ll need to follow that up with 22 screws… again.

I did notice at this point that the caps-lock key was not soldered in place.  This was quite an easy fix using my QuadHands helping hands and my Weller Soldering Station.

Now we can turn our attention to the bigger problem.  The busted space bar torsion tabs.  These tabs hold the torsion bar in place, preventing the space bar from torquing when you press the opposite end. These tabs have been broken off and are completely missing.  However, I came up with a pretty decent work around for repairing the Commodore PET than I think will be a long term solution and last a lifetime.

There are two stanchions on the keyboard, and the wire drops down in side them.  What I decided to do was create a tab that is sort of L-shaped that will drop down in between the two stanchions, but also give me a plenty of surface area to securely attach it with CA glue.  I did a little graphical tutorial in the video above that makes this a little simpler to understand.

I was able to use my Tacklife “Dremel style” rotary tool to cut a an L-shape into some ABS plastic I had laying around from a previous project. Repairing the Commodore PET Model 4016 was a success!

One thing that gets newbie hobbyists every time when they take on a project like this is forgetting or not thinking to take pictures of the computer before taking it apart.  Always take a before photo!  This honestly applies to any project, whether computers, cars, or repairing furniture!  Those photos will be invaluable when trying to reassemble something. 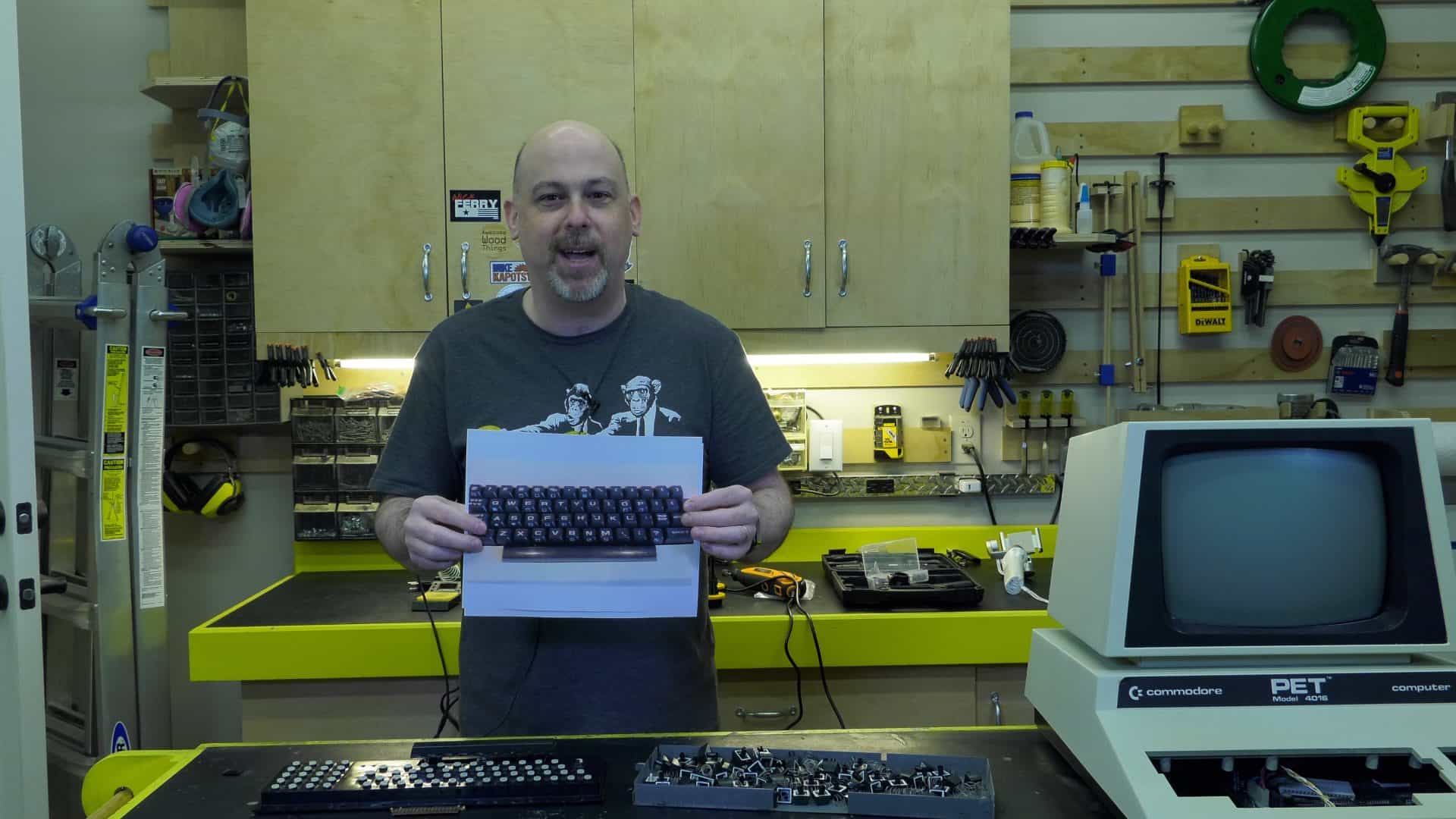 Get the Tools Used in this Video

As always, if you are interested in any of the tools I used in this video, or the awesome Pulp Fiction monkey shirt I wore there are links below:

Well now that I am finished repairing the Commodore PET Model 4016 I am back to using it!  I started off by writing a simple two line basic program! 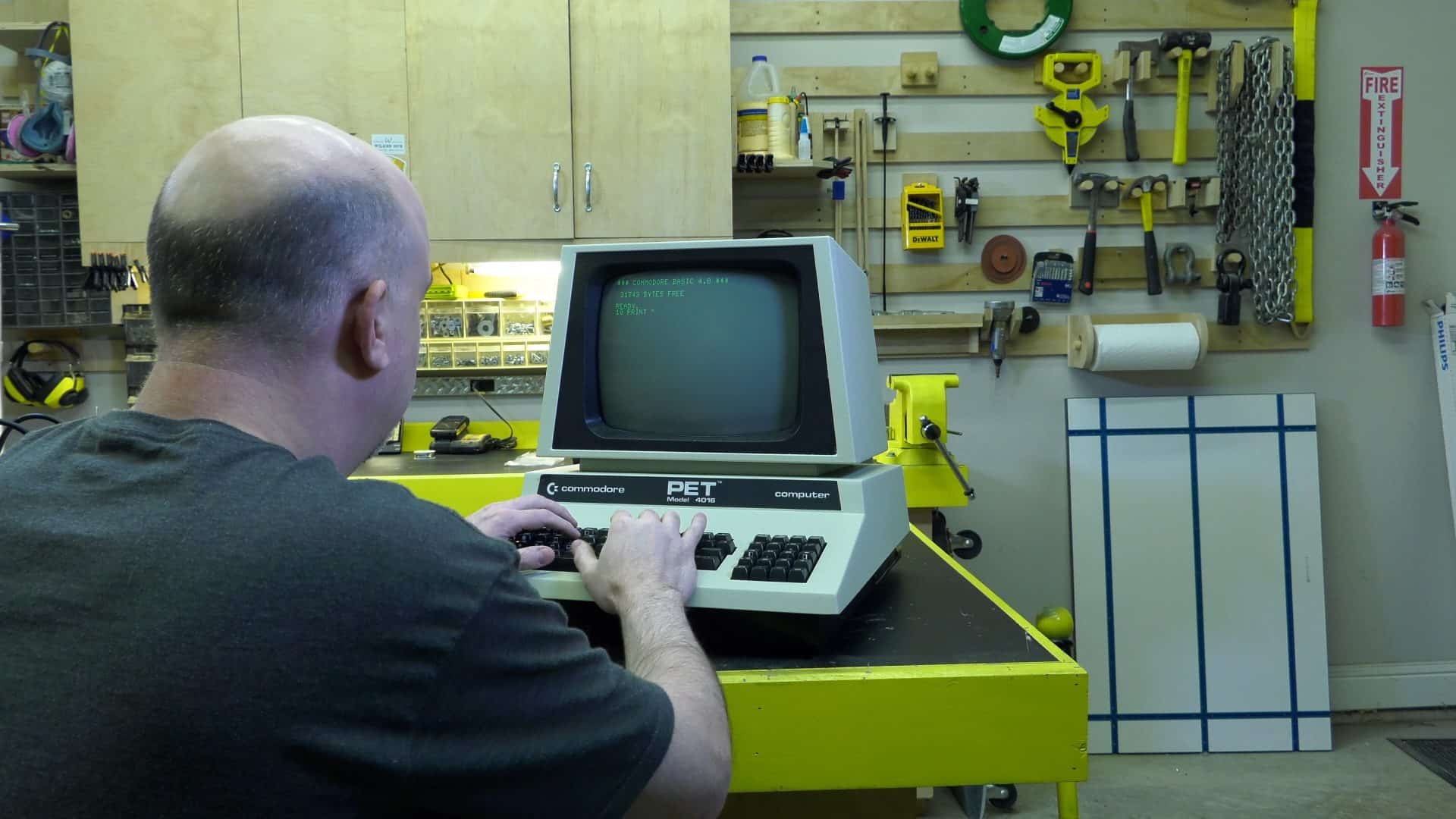 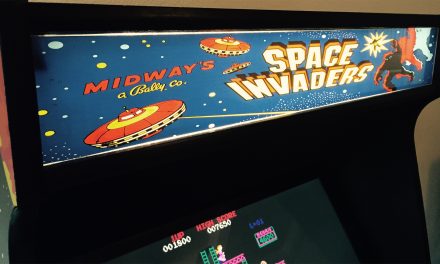 How to make an Arcade Machine: Part 3 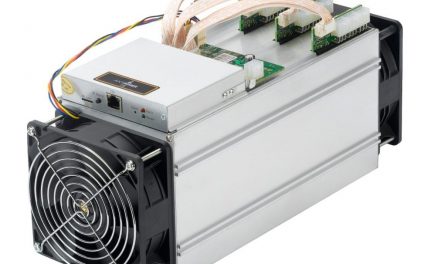 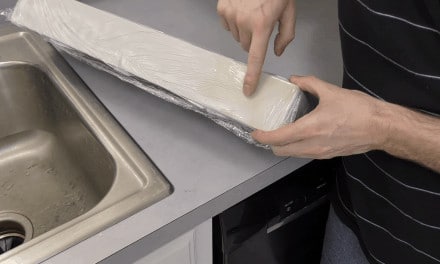