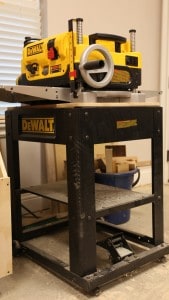 I purchased my DeWalt DW735X Planer from Amazon.  The DW735 and DW735X are the exact same planer.  The X designation simply means it includes an extra set of replacement cutter head blades and a set of infeed and outfeed tables.  If you’re looking to buy one of these, get the X version.  You’ll spend less money and the infeed and outfeed tables are incredibly useful.  You won’t ever regret getting them.  And when the planer isn’t in use they fold up nicely on the sides of the planer (as long a the dust collect hose isn’t connected).  I also opted for the wheeled stand that DeWalt makes for its portable planers.  My rule is that everything in the shop must be movable.

The Best Planer for the Buck, Period

I did a lot of research on planers before I bought my DeWalt DW735X.  Every planer I looked at had pros, but lots of cons.  I came to realize that there’s no such thing as the perfect planer.  Some weigh a literal ton, some are very inaccurate, and some snipe the hell out of the ends of your material even though the rest looks great.  This planer is a relatively low cost planer that gives fantastic results, with near non-existant planer snipe, and almost no other frustrations.   The size and shape make it easy to work with.  It has a built in ejection fan which I swear must have a tornado held captive in there.  It has more power than my shop-vac!

As mentioned before, the DW735 and DW735X are the same unit.  The X simply adds the option infeed/outfeed table extensions and an extra set of planer blades.  I’d highly recommend you go with the X version.  The table extensions fold up when not in use to save shop space.  The planer also comes with options for connection a 4″ dust collection hose, or a 2″ dust collection hose.  I have mine setup with the Rockler quick disconnect system.

The DW735X  can be bought with a stand made by DeWalt (also works on the DW735).  The stand is probably my only  complaint, which really has nothing to do with the planer itself.  The stand is a little bulky by design but I find it tolerable.  The big gripe is the “kick-stand” design.  It rolls around on two really cheap plastic wheels on one end.  The other end incorporates a kick-stand that raises and lowers two fixed feet, allowing the stand to roll around on a third swivel wheel.  If the design itself wasn’t clunky enough, the kickstand can be mounted on the inside or the outside of the stand.  Both options suck.  On the inside it is a constant pain to wedge your foot under it until you get it just right to raise or lower it.  On the outside its protrudes about 8″ or so from the stand.  This turns it into a constant tripping hazard and toe breaker.  Easier to use, but ultimately far worse.  I’d honestly suggest just building your own stand or setting it on a benchtop.

So other than the stand, which has nothing to do with the DW735X itself, I can’t recommend it enough to someone who doesn’t have the shop floor space and/or the money to buy a larger machine. And really what else can I really say?  It comes in The Geek Pub colors!

Back to the Shop Tour